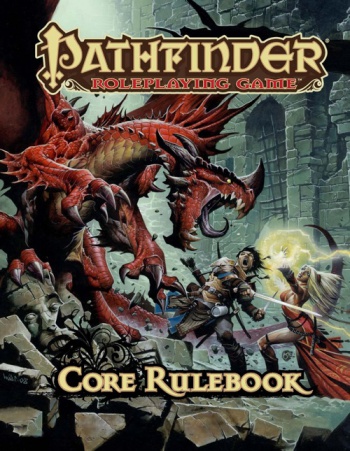 Dungeons & Dragons has slipped to the #4 sales spot.

Update: In a post on Google+, Monte Cook has refuted the idea that Numenera didn't sell well enough to rate this list, instead saying that the majority of Monte Cook Games' sales are through direct or alternate distribution like Amazon. As noted in the original article, ICv2 only surveys traditional hobby games distributors and stores. "As of a few weeks ago," Cook said, "we were at an estimated 18,000 customers."

That puts Numenera on a similar footing to Evil Hat Productions' Fate Core, given what we can tell from their openness with numbers, though it's hard to draw a definite conclusion as to which system sells better due to Fate Core's pay what you want PDF model. Cook partly attributed some of Numenera's success to the inXile video game kickstarter for Torment: Tides of Numenera, which is based on Numenera's Ninth World setting.

Original Story: Industry trade publication ICv2 has released its sales statistics for Fall 2013, and several newcomers have pushed Dungeons & Dragons out of the top three most popular tabletop roleplaying games. Pathfinder, Star Wars: Edge of the Empire, and Fate Core now occupy the top spots in the business, at least in sales terms. D&D is down, but hasn't released any major products in the last year - so no surprise there. Star Wars: Edge of the Empire jumping up is no surprise given its roots at Fantasy Flight Games - a company with large market cachet leveraging the Star Wars brand would have to try hard to fail.

Fate Core jumping up to third is probably the biggest surprise on the list, because it looks like they've managed to parlay their huge Kickstarter success into a stream of sales. Most notably absent from the list is Monte Cook Games' Numenera, which while having a more successful Kickstarter than Evil Hat Productions - netting over half a million dollars - has apparently not turned that initial success into a steady flow of sales.

D&D will likely make the jump back up to the top spots later this year, with the release of the new edition in August of this year. For now, however, it's a telling story about how much of their market share Wizards of the Coast has ceded to Paizo.

ICv2 compiles statistics from interviews with retailers, distributors, and manufacturers. It releases them as part of its Internal Correspondence publication.