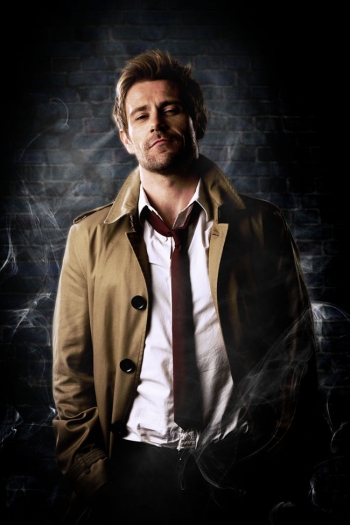 NBC has released the first photo of Matt Ryan in the upcoming TV series Constantine.

The first image of Matt Ryan as the lead in NBC's upcoming series Constantine has been released. Sporting the classic John Constantine trio of tie, trench coat, and cynicism, Ryan certainly looks the part. NBC announced Ryan's casting as the occult detective in February. The TV series is based on the DC comics character John Constantine, who starred in the Hellblazer comics from DC's Vertigo line and later in DC's The New 52 title Constantine. Writer and producer David Goyer has said that NBC's Constantine will "[cling] more closely to the source material than the film." The 2005 Keanu Reeves version of Constantine is widely regarded as a poor adaptation of the comic books.

Ryan is known for his role as the voice of Edward Kenway in Assassin's Creed IV: Black Flag and on Criminal Minds: Suspect Behaviour. The Welsh actor has gone blond to play Constantine, who is described by NBC as an "enigmatic and irreverent Liverpool con-man-turned-occult-detective", and is a blond Londoner in the comic books. The photo also shows Ryan wreathed in smoke, a reference to Constantine's chain-smoking habit. Whether the NBC series will feature that particular vice is still being decided. "That's a tricky one on network TV," says Goyer. "We're negotiating right now. He will have his signature trench coat and skinny tie."

"I've been a fan of John Constantine since he was first introduced in 1985. This Constantine, envisioned by Neil Marshall and embodied by Matt Ryan, looks like he sprang directly from the comics' covers. Fans old and new are going to be in for a treat," says Goyer. I have to agree. Ryan has nailed the scruffy, good-looking vibe of Constatine, but we'll have to wait until the pilot to see if he's got the cynical, deadpan humor too. If he does, he'll join my list of ruggedly handsome detectives to watch, alongside Nathon Fillion in Castle and Matthew McConaughey in True Detective.