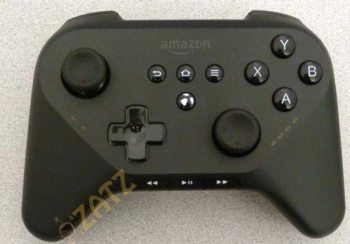 Here's our first look at Amazon's Bluetooth gaming controller, which is said to be sold separately and also work with Kindle Fire devices.

Earlier this year, it's been reported that online retail giant Amazon will ship an Android-powered console that will be able to stream videos, music and TV shows, and is even said to directly compete with the PlayStation 4 and Xbox One. Now, it seems we have our first look at Amazon's gaming controller for its media streaming/video game box. Courtesy of Zatz, the gaming controller shown is said not to ship with Amazon's upcoming media streamer, but will be sold separately and even expected to work with Kindle Fire devices. As you can see from the image, it heavily borrows the Xbox 360's button and stick layouts, and even has bumpers and triggers, too. It does sport a few differences, though, like the back, home and menu buttons that should be familiar with Android users. And at the bottom of the face, there are media playback buttons (just like on the OnLive controller) which should make watching videos using the pad a tad easier.

It's still not clear when Amazon will release the controller commercially or how much it will cost, but it's expected to run on a pair of AA batteries. Keep in mind that these leaked images haven't been confirmed by Amazon, so there's a chance it could be a very good fake. We'll update the story once we know more details.

It might just be me, but the controller looks to be a little too "cold" for some reason; and seems to lack the Xbox game pad's appeal even though they're virtually identical. What do you make of Amazon's gaming pad and would you even consider getting one?