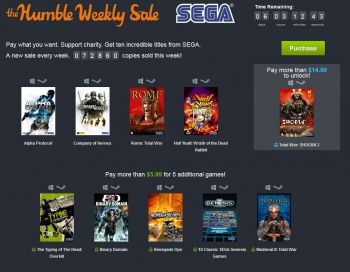 Many gamers still think of Sega in relation to Sonic the Hedgehog, but the publisher has amassed an impressive variety of titles over the years. Outside of its classic Genesis console, Sega has released shooters, strategy titles, RPGs, platformers, and even zombie-themed typing simulators. Now the latest Humble Bundle Weekly Sale is driving this point home with three Total War games, ten Sega Genesis classics, and another six titles that draw from multiple genres.

Total War is definitely the highlight of this bundle, with the Rome, Medieval II, and Shogun 2 versions all being featured. That said, if you'd prefer a little World War II strategy instead, the bundle also has Relic Entertainment's Company of Heroes. Shooter fans can turn to Binary Domain's robot battles, or the top-down vehicular combat of Renegade Ops. RPG fans will get one of gaming's rare forrays into spy territory with Alpha Protocol, while platformer players can try Hell Yeah! Wrath of the Dead Rabbit. And if you like grindhouse films, zombie-killing, and increasing your typing speed, The Typing of the Dead: Overkill should be up your alley.

If you've lost count, that's nine games to occupy your time, and we haven't even finished yet. Sega is also tossing in another ten Genesis classics to raise its total to nineteen, specifically Altered Beast, Comix Zone, Crack Down, Ecco the Dolphin, Gain Ground, Golden Axe, Golden Axe 2, Golden Axe 3, Shinobi III: Return of the Ninja Master and Vectorman. You've got another six days to decide whether Sega's bundle is worth spending money on, but with this much variety, the odds of finding something to your liking is incredibly high.