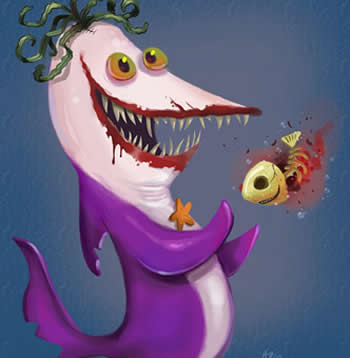 If you've ever wondered what Batman's enemies might look like as sharks, Jeff Victor has the answer.

It's Friday. No one cares about the news on Friday. You know what people do care about, though? Sharks and Batman. Luckily, Jeff Victor, an artist from Los Angeles, has combined these two items into a series of handsome illustrations.

Aptly titled "Sharkham Asylum," the series answers a question that Batman fans have been asking for decades: "What if Batman's enemies were actually sharks?"

Several months ago, Victor created toothy renditions of the most iconic members of Batman's rogues gallery. Though, Scarecrow is noticeably absent, which probably makes Cillian Murphy a little sad.

All of the illustrations can be found over a Jeff Victor's blog. He doesn't spend a lot of time talking about the process behind any of the pieces. Though, it sounds like Bane went through a lengthy refinement process.

"I had an idea to try and do a shark cage tied around his face to represent his mask," Victor writes, "but then I thought it might just be better to stick with the Bruce Timm costume instead of doing the Christopher Nolan-verse Bane. A teeny tiny shark cage just wasn't reading the way I wanted. Oh well."