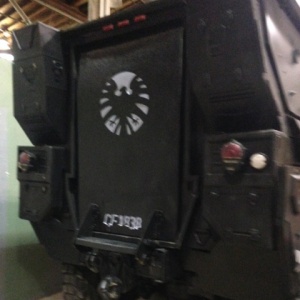 Please, please please don't let this mean that Skye will be helping Rocket Raccoon with his hollywood hacking.

Do we know how Marvel plans to tie Guardians of the Galaxy to the larger Cinematic Universe? We might now, if spy pics supposedly taken on theset of the ongoing additional filming forGuardians of The Galaxyturn out to be the real thing.

As you can see in the photo at the top of this page, the pics are of military vehicles bearing the S.H.I.E.L.D. logo. If they are indeed real then we may have proof the agency appears in some capacity in the film. The question now is, of course, in what capacity?

Little is known about the additional shooting, aside from that they involve Chris Pratt (Star-Lord) and Dave Bautista (Drax The Destroyer) in some way. But, on twitter director James Gunn had this to say: "Anything you want you didnt get? Go for it. Something to make the movie better? Do it. Cool cameo idea? Bring 'em in." I'm going to bet money that they're currently filming the stinger. This wouldn't be the first time a Marvel film's stinger was shot months after principle shooting wrapped - the shawarma scene from The Avengers wasn't filmed until after the film had its official premier.

This throws an interesting light on the rumors surrounding the fate of spy agency S.H.I.E.L.D. in the wake of the events of Captain America: The Winter Soldier. Trailers have already (apparently) spoiled that Samuel L. Jackson's Nick Fury is killed at some point in that film. Assuming that actually happens and isn't just a red herring, it connects nicely with other rumors that the agency is disbanded or in some other way hopelessly compromised during the film. And of course, there are corresponding rumors that this will end up shaking things up on Marvel's Agents of NCIS Marvel's Agents of SHIELD to boot. These spy photos would seem to suggest that reports of S.H.I.E.L.D.'s death may have been greatly exaggerated.

I'm going to just take a stab in the dark and guess that the stinger takes place on Earth. That makes sense, since Star-Lord, AKA Peter Quill, is originally from Earth. But naturally, we need to take this with a huge grain of salt. Spy pics can be very unreliable, and for all we know the spy in question was on the set of Marvel's Agents of SHIELD, not GOTG. Still, enjoy speculating wildly in comments.