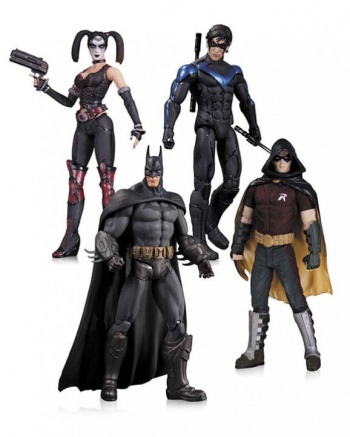 The New 52 universe of DC Comics may have found something of a mixed reception, but the company is faring well in other departments. Vertigo is in the middle of a new Sandman series, John Constantine is coming to television, and the Scribblenauts Unmasked DCU is incredibly charming at the very least. Now DC Collectibles is doing everything it can to provide this variety in paperweight form, including figures of Dream, Harley Quinn, Lil' Robin, Scribblenauts Constantine, and the official Zombie Batman.

The full collection is part of DC Collectibles' June solicits, and there's a little something for every DC fan here. Are you interested in straightforward figures of characters like Batgirl, Nightwing, or Supergirl? No problem. How about dynamic action scenes, like Superman fighting Darkseid or Wonder Woman challenging a Hydra? Those are here too. There's even Batman statues based on the Lil' Gotham universe, including adorable versions of Joker, Harley, and Robin. And if you want something a little darker, there's always Batman Black & White's Zombie Batman.

All of these are interesting enough, but personally, I'm very curious about the Scribblenauts Unmasked Mini-figures. The third and fourth series of the Scribblenauts line includes multiple 2.25" figures, which covers Batman, Reverse Flash, Yellow Lantern Sinestro, Swamp Thing, Deathstroke, and a British magician by the name of John Constantine. By this point there's enough Scribblenauts Unmasked figures to build a rather impressive diorama, perhaps while generating superhero sound effects with your lips. I would imagine.

These collectibles are all expected to go on sale in September of this year. That gives you lots of time to decide what you'd prefer; an ordinary Sandman statue, or a limited edition in bronze. Decisions, decisions.