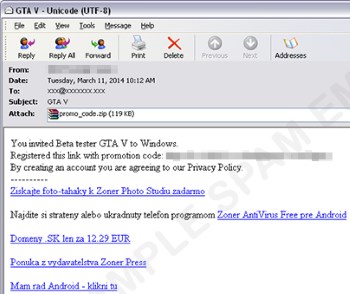 "There is no Grand Theft Auto V for PC." Say this to yourself three times and keep it in mind when you receive an email offering an invitation to the beta test. It's not real, and in fact, according to Trend Micro, the links included in the emails lead to several sites that will bring you nothing but woe.

"You invited Beta tester GTA V to Windows," an image of an email sent out as part of the spam campaign states. "Registered this link with promotion code... By creating an account you are agreeing to our Privacy Policy." The links, written in Slovak (which may explain the preceding Engrish text) lead to several sites, one of which is a phishing site; there's also an attached .ZIP file containing an application that purports to be an access code but which is actually a known backdoor trojan.

The email is so clunky and mangled that you might think it would be easy to pick it out as a scam, but not everyone pays as much attention to things as they should before clicking on them, and as Trend Micro noted, a lot of people are very anxious to get GTA5 on PC.

"In the past, we have reported several spam attacks that banked on the success and popularity of online games in order to proliferate malware. Games like World of Warcraft and Grand Theft Auto IV were also leveraged before by spammers," it wrote in its Threat Encyclopedia. "Clearly, the worldwide success of these games makes it a good social engineering lure to trick users. In this specific case, spammers capitalized on the much-anticipated release date of Grand Theft Auto V on PC, XboxOne, and PS4."

So keep your eyes open for this one, and if you get it - don't click it!