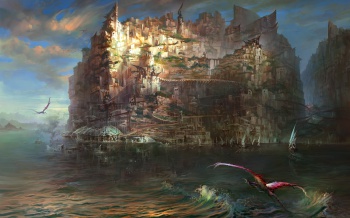 Torment: Tides of Numera Design Lead Adam Heine discusses some of the tabletop influences on the upcoming spiritual successor to Planescape: Torment.

Monte Cook's Numenera science fantasy tabletop RPG has taken a divergent approach to the genre relative to his Dungeons & Dragons roots, and the spirit of his ideas will be translated into inXile's upcoming CRPG Torment: Tides of Numenera. In an interview with an Italian fan blog, Design Lead Adam Heine spoke about what we can expect.

In Numenera, players aren't awarded XP for killing monsters, but rather through "discoveries." For instance, the players may come across an artifact that turns out to be a form of ancient hovertrain, and once they jury rig it to function, they are awarded XP. Heine confirmed that this system will be implemented in Torment.

"First, we aren't giving XP out for killing enemies," Heine said. "For one thing, it would endanger our 'no trash mobs' policy. But also, you give out XP when players overcome challenges and make progress toward their objectives-when they do the things you want them to do. Killing enemies is one way to solve some encounters, and in those cases the player gets XP-not because they slaughtered monsters, but because they solved the encounter. If they use their wits instead, they'll still get XP because the goal is to solve the encounter. That's what the player should earn XP for.

"So in Torment, you'll earn XP for solving quests and other problems, for unearthing truths and memories, and yes, for making discoveries. How you go about these things can matter (it's likely you'd get more XP for a more difficult solution, which may or may not involve combat), but the XP is given when the quest is solved or the discovery made."

Numenera also includes a "GM Intrusion" system, in which the Game Master may decide to make a change to an encounter on the fly. For instance, he may have your sword slip out of your hand and into a nearby chasm mid-combat, at which point you have to adapt to the new circumstance - and are thereafter awarded additional XP. This is a system that Heine would like to see in Torment. "We're still talking about ways of adapting GM intrusions," he said. "We want to include them, but we'd like them to feel immersive and organic."

Heine goes on to discuss his team is aiming to include more customization options than the tabletop provides in character progression, with "more class abilities than in the Corebook, a defined set of Skills, and the PC will be able to switch his Focus on the fly. So there should be enough there to give the player a sense of progression and choice at each Tier."

The team is implementing Artifacts and Cyphers "as close to the spirit of the tabletop as we can," but one area in which Torment will differ is combat. "The end result [of the combat system] will probably feel different from the tabletop game. It'll also be quite different from Wasteland 2. We're using WL2's code where it makes sense, and we're taking lessons learned from WL2, but Torment's design is brand new; we're not trying to force that design into a system that wasn't made for it."