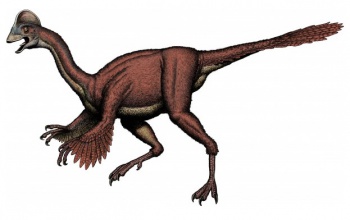 Scientists have discovered a new species of dinosaur that they are calling the Chicken From Hell.

Fossils excavated from a North Dakota ranch in 1999 have been classified as a new species of dinosaur. Officially, the scientific name of this new species is Anzu wyliei . Unofficially, scientists call it the Chicken From Hell.

Weighing in at 500 pounds and measuring 11 feet in length, Anzu is the biggest member of the oviraptorosaur (literally "egg thief lizards") group of dinosaurs found in North America. Its nickname is derived partly from the rock layer in which it was found - the Hell Creek Formation - but the dinosaur's unsettling appearance played no small part in its name.

"It would look like a really absurd, stretched-out chicken," said paleontologist Emma Schachner of the University of Utah, one of the scientists describing the new species.

"It would have been a cross between a chicken and a lizard," said Tyler Lyson, a paleontologist at the Smithsonian's National Museum of Natural History.

"This group of dinosaurs looks really bizarre even by dinosaurian standards," said Hans-Dieter Sues, another Smithsonian paleontologist and a co-author of the paper - "A New Large-Bodied Oviraptorosaurian Theropod Dinosaur From the Latest Cretaceous of Western North America" - published Wednesday in the journal PLOS One.

Carnegie Museum paleontologist and lead author of the study Matthew Lamanna explains that the Anzu would have had a lot of birdlike behaviors. "When people think of a dinosaur," he said, "they think of something like a T. rex or a brontosaurus, and when they think of a bird, they think of something like a sparrow or a chicken. This animal, Anzu, has a mosaic of features of both of those groups, and so it basically provides a really nice link in the evolutionary chain."