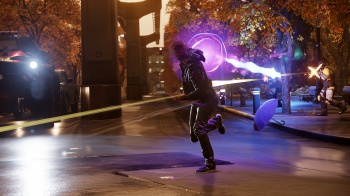 By dialing a number that appears on in-game billboards, players can get a Big Brother-style message from villain Brooke Augustine.

Players who have been engrossed in PS4 exclusive inFAMOUS: Second Son are already familiar with Brooke Augustine, authoritarian director of the Department of Unified Protection. Charged with rounding up the super-powered conduits of Seattle, including the game's protagonist, the department has set up propaganda-laced billboards throughout the city demanding citizens report unusual activity via a special phone number.

Well, it turns out dialing that number, 1-844-HELP-DUP, on a real world phone gets you a very special message from director Augustine herself. A prerecorded message mentions Cole McGarth, protagonist of the first two inFAMOUS games, and a few other plot elements from prior games in the series.

"Bioterrorism. What do you think of when you hear that word? Cole McGarth? The Beast?" Augustine asks. She then goes on talk about the threat posed by people carrying the conduit gene. "Do your part for a brighter, safer world," she ends.. Just something to keep in mind the next time you have the chance to narc out your super-powered next door neighbor.

In his review our own Jim Sterling referred to Augustine as "one of the most delightfully despicable villains a videogame has ever produced." He gave the game a 3.5 out of 5, praising the story but knocking it down a few points for some formulaic ideas.