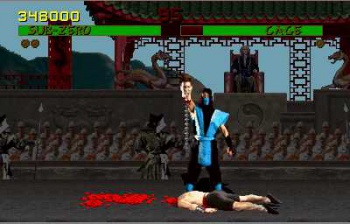 The Chief Juvenile Probation Officer of Tom Green County in Texas says rap music and video games are to blame for the rise in violent behavior among today's kids and young adults.

Violent crime in the United States has declined rather dramatically since the early 1990s, a span of time that just so happens to coincide with the mainstreaming of video games. Did the 1993 release of Doom finally teach us the error of our ways? I don't want to confuse correlation with causation, but facts are facts, and the U.S. is a less murderous nation than it was 25 years ago.

But Mark Williams, the Chief Juvenile Probation Officer of Tom Green County in Texas, isn't about to let facts get in the way of his narrative. In an address to the San Angelo Rotary Club last week, Williams spoke out about the malaise that has gripped the current generation of youth and what he believes is responsible for it.

He touched upon the challenges faced by single, young mothers and the problem of broken homes, which deprive children of proper role models as they're growing up. That leaves them susceptible to the influence of modern culture and its obsession with sex and violence, which are particularly prevalent in rap music and video games.

Games, in fact, have surpassed rap music as the primary threat to the hearts and minds of today's youth. "Rap music used to be the subject of my soapbox speech until I found out what's in today's video games," Williams said. "In my position I think I know what's happening in the minds of our youth, and then I get exposed to more things reaching them and it just blows me away."

Williams said that while adults today may look back fondly on games like "Mario Brothers Double Dash" or Legend of Zelda, modern "shooter" games are desensitizing kids to the dangers of sex and violence. He even went so far as to compare them to actual drugs. "As the body becomes physiologically accustomed to a little lift from a gateway drug, the person graduates to harder drugs," Williams said, "I see video games as something where once the thrill of playing a video game is gone, what's the next step?"

Williams mentioned four specific games in his speech that he said are "wildly popular" with youth and also especially dangerous: Mortal Kombat, Call of Duty: Modern Warfare 2, Postal 2 and Grand Theft Auto V. He also warned people in attendance that Postal 3 is coming out "in a few weeks," despite the fact that it actually launched in late 2011. And he dismissed studies showing that playing violent video games does not translate into violent behavior in the real world.

"There's a juvenile case headed through our local courts right now. The defense lawyer's argument is based upon the fact that the kid was unduly influenced by violent video games," he claimed. Of course, rather like the launch of Postal 3, that particular defense strategy isn't exactly news either.