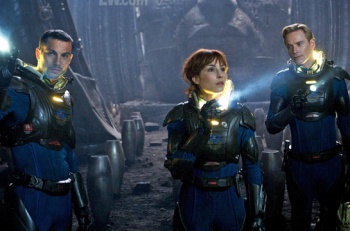 Ridley Scott is expected to to continue his Alien prequel franchise, with Michael Fassbender returning as multiple David androids.

Our own Moviebob enjoyed Ridley Scott's Prometheus, but the internet is far more divided about it, and understandably so. It was an Alien prequel that barely featured Aliens, played fast and loose with character motivations, and had more plot holes than a Sulaco's worth of chest cavities. Nonetheless, Scott had a pretty clear idea of where he wanted a sequel to go, so when 20th Century Fox announced an untitled Ridley Scott film, Prometheus 2 seemed like a natural candidate. According to "multiple sources" for The Wrap, this is absolutely the case, which means we could expect a Scott directed Prometheus 2 to reach theaters in March 2016.

The original Prometheus ended with Elizabeth and David, against all common sense, choosing to make the journey to the Engineer homeworld. Whatever that entails, sources say Prometheus 2 will have an "Alien-y" tone more in line with the previous franchise than Prometheus. Whether that means the classic Xenomorphs will return isn't clear, although the same sources noted that Prometheus 2 will feature multiple David androids, meaning several Michael Fassbenders could occupy screen at one time.

Fox hasn't yet confirmed whether Scott will direct Prometheus 2, but a writer has been chosen: Green Lantern's Michael Green. I'd rather not hold that movie against him (Green Lantern had another three screenwriters, after all) but it's certainly not going to fill fans with a great deal of confidence in the project. We'll have to wait and see, but hopefully it will be a step forward from Prometheus 1... or at least a step to the side to avoid any rolling spaceships.

Source: The Wrap, via Collider