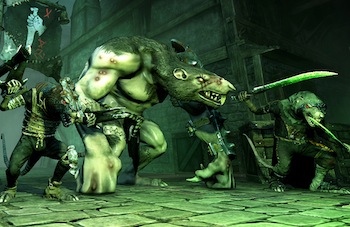 Tactical combat comes to the City of the Damned.

If all you do is paint a few minis and play the occasional round of Dawn of War, you're missing out on a huge bulk of the Warhammer universe, particularly the underappreciated Warhammer Fantasy setting. But tabletop games can be expensive, and finding time to actually play with fellow gamers in real-life can be difficult. That's where computers come in! Now, the classic Mordheim board game is getting a PC release later this year. Being developed by Rogue Factor, it'll have all the same tactical goodness of the original, but without having to worry about losing any of the fiddly bits.

Everything was fine in the Imperial city of Mordheim until the Comet of Sigmar came crashing in. Now, gangs are squabbling over "Wyrdstones", which are powerful artifacts that you should avoid coming in direct contact with. The video game version will feature the same iconic warbands from the original, such as the Sisters of Sigmar, the Skaven, Possessed, or Mercenaries from the Empire.

It'll maintain the same tense, turn-based gameplay as the boardgame. You'll have to carefully plan out your movements, set up ambushes, and use the talents of your units to the greatest effect. Between missions, you'll loot new items and weapons, and level your warband up. This is definitely a game you can put in the "if you like XCOM" category, a file that is growing wonderfully fat these days.

While the boardgame hasn't received love in many years, it still retains a cult following. First Space Hulk gets an electronic version, now this. It's a good time to be a Warhammer fan who doesn't have the time or money to play the physical versions.