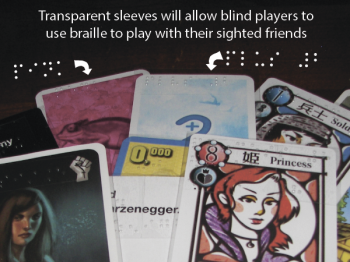 A husband and wife team are going to make a big list of popular games accessible to the blind.

Board Games have long been a hobby that excluded blind players by their very nature - but that isn't something that had to be so. Enter Emily and Richard Gibbs, also known as 64oz Games. They've teamed up with various game publishers to produce transparent sleeves with printed braille for many popular card games. That simple twist makes a whole category of games accessible to large swathes of blind players. They've teamed up with a large variety of famous publishers to support their games, and examples include favorites like Love Letter. It also looks like they're working on a version of fantastically popular game for horrible people Cards Against Humanity.

Alongside their primary efforts, the Gibbs are starting up some games that don't require sight to flourish, like a tactile microgame that will be funded through their Kickstarter - called Yoink!, which from the available rules preview seems like a speedy, fun party game. They'll also be producing a documentary called In Touch With The Game about the process of making games blind accessible.

Their game accessibility kits will be print on demand, allowing a larger variety of games to be accessible at any given time. The initial games are fascinating, covering both casual and niche hobby titles. The games on their initial list, for example, include Love Letter, The Resistance, Coloretto, Uno, Guillotine, San Juan, Race for the Galaxy, Bohnanza, and Dominion.

For more information, check out their currently running Kickstarter. It ends on April 24th.