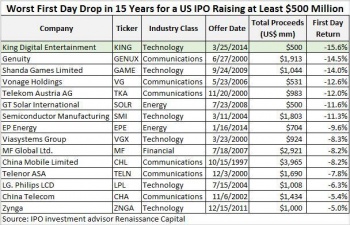 The Candy Crush Saga maker has set a record for the worst first day performance of any US IPO.

Earlier, we heard that Candy Crush Saga maker King.com would start trading as an IPO on the New York stock exchange. Now, after just a single day of trading, King has set a new record... though it may not quite be the one they were hoping for. King's stock price dropped a whopping 15.56%, making it the worst first day performance of any IPO in US history.

The Renaissance Capital Twitter account has Tweeted a table with the top fifteen "worst first days", showing King right at the top with it's record-breaking loss. The second lowest was a company called "Genuity", who, in 2000, lost 14.5%. Interestingly, Zynga is in the number fifteen spot, with a first day loss of 5% stock price.

King has built up quite a name for itself as a copyright troll and bully, at first attempting to trademark the word "candy", and then trying to bully completely unrelated games into submission. This news should bring a smug look of satisfaction to the faces of those wronged by King, which seems to increase in number daily.

I can't help but smile just a little as I type out this story.