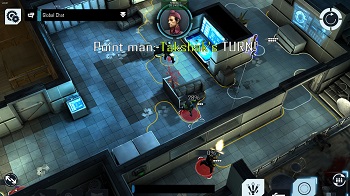 The turn-based cyberpunk MMO finally sees the light of day.

While last year's Shadowrun Returns did a pretty good job introducing the classic cyberpunk setting to a new generation, that wasn't the only Shadowrun game in the mix. If you think back, there was also Shadowrun Online, which was successfully kickstarted in 2012, but has been running quiet ever since. Now, Cliffhanger Productions has come out of the shadows to announce that an early build of Shadowrun Online is hitting Steam Early Access on March 31st.

While billing itself as an MMO, Shadowrun Online's turn-based combat means it's not aiming to be a WoW killer. The Early Access build will ship with a single PvP map and a few basic skills to play with. "We don't want to pile on features unless we have nailed the core gameplay elements, so we created this small and polished section for our players to enjoy," Cliffhanger Productions co-founder Jan Wagner said. From that small sample, it hopes to do monthly updates, all with input from the community.

Cliffhanger has its work cut out for it, as it's trying to play with a setting currently defined by Shadowrun Returns. Still, how can more cyberpunk shamans ever be a bad thing? When Shadowrun Online releases, it'll be on PC, Mac, and mobile platforms, with cross-platform play between them all.