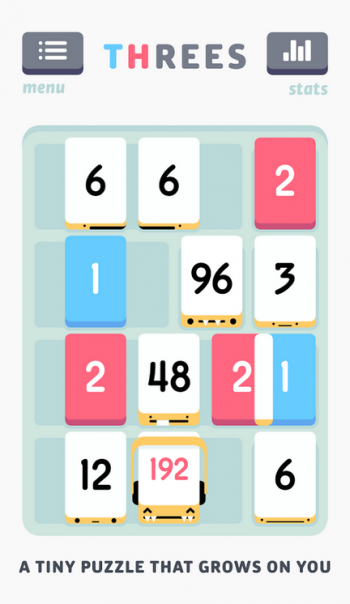 The creators of Threes, the number-merging game that started it all, aren't happy about the inferior clones that have stolen their thunder.

If you haven't seen 2048 yet, it's a fairly simple number-matching game that's been all the rage lately. However, it's more than a little "inspired" by Threes, which was released about a month earlier. Cloning has always been a big problem for these types of games, and it's always hard on the original developers. The designers of Threes have posted a lengthy open letter to 2048 and other "rip-offs" of their game, and they're not mincing words; they're upset that their carefully-crafted game is getting overshadowed by a poorly-designed copycat.

"2048 is a broken game," write Threes creators Asher Vollmer and Greg Wohlwend. "We wanted players to be able to play Threes over many months, if not years. We both beat 2048 on our first tries." The main difference between the games is that Threes shifts your numbers by one row or column per move, while 2048 slides them as far as possible. It's a small change, but it completely disrupts the balance that Asher and Greg spent a year and a half refining. "We worked really hard to create a simple game system with interesting complexity that you can play forever. You know, simple to learn, impossible to master."

The critical flaw the team sees in 2048 is that, because of the change in movement, it's very easy to figure out. One simple strategy that many have discovered makes it trivial to get a huge score without even looking at the numbers on the board - something that isn't possible in Threes. And yet 2048 has seen an explosion of popularity, while many aren't even aware of its progenitor.

"We do believe imitation is the greatest form of flattery," Asher and Greg write, "but ideally the imitation happens after we've had time to descend slowly from the peak - not the moment we plant the flag."