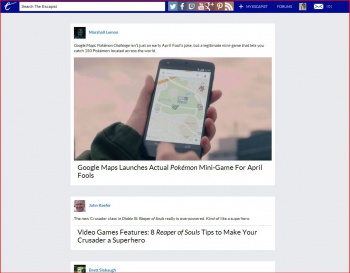 Fresh off its acquisition of Oculus Rift, Facebook CEO Mark Zuckerberg has expanded his portfolio to include the "Rolling Stone" of game journalism.

Update: After years producing videos for The Escapist, LoadingReadyRun's Graham Stark had something to offer on the acquisition based on his own experience, saying, "When we sold LoadingReadyRun to the Yummies Snack Food Corp all those years ago, I was concerned that we'd have to compromise our creative freedom by talking about how moist and delicious Yummies Snack Cakes are, instead of making comedy. But the makers of those healthy, full-of-fibre 'anytime snacks' knew well enough to let us do our jobs. As long as Facebook can show the same cream-filled compassion with The Escapist, I'm sure both sites will last longer than Yummies' famous 'Cinnamon Chew' cakes, the shelf-life of which is still yet-to-be-determined!"

Lisa Foiles also had something to say. One of her top five comments on the purchase was: "Everyone should prepare for a new layout change and tons of 'Which Escapist Content Creator Are You?' quizzes in their news feed. I get that Miracle of Sound guy every time. Which is weird because I'm not even Australian."

Original Story: We at The Escapist are pleased to announce that we are now in the same corporate family as WhatsApp, InstaGram, the Oculus Rift and, everyone's favorite social network, Facebook. The purchase may come as a surprise to armchair financial analysts, but it's clear now that Facebook is set on path to expand its portfolio beyond pictures, videos and VR to actual game journalism. The exact details of the purchase are undisclosed, but we can report it included $50 million in cash and 665k shares of Facebook stock worth around $40 million. There are also significant cash bonuses in store for key Escapists such as Yahtzee Croshaw, Bob Chipman and Graham Stark once unspecified goals are met. Right now, there are no plans to change The Escapist's focus on video games and geek culture but there may be some visual differences in store.

"There's only one video game website I check regularly," said Facebook founder Zuckerberg. "I really respect what Yahtzee Croshaw has accomplished, and I'm excited to see The Escapist grow once we get Facebook's user experience designers working on it," he added, unveiling a few screenshots and a working prototype of what he expects The Escapist will look like under its new ownership.

"The Escapist is humbled by the confidence the large purchase price shows, and we promise to continue to deliver the video series and articles that earned us all those Webby Awards and accolades from Mashable," said Alexander Macris, founder and publisher of The Escapist. Mr. Macris is expected to remain with The Escapist during the transition period, although he will be commuting to and from his new residence in Ibeza, Spain, starting in May.

The staff and many of the video contributors to The Escapist learned about the acquisition yesterday in a company meeting held over Facebook. There was stunned silence from the gathered editors and contributors when Macris announced the purchase but they soon erupted into a joyful cheer.

"I have always believed in the work Disney does, and am delighted to be brought into the Disney brand family," said Jim Sterling, reviews editor and Jimquisition host. Mr. Sterling will be transitioning from the company in May.

"Great day!" said Bob "MovieBob" Chipman. "I feel like a Winklevoss, except not good-looking, or rich, or two people. We are all Winklevii now!" Facebook has confirmed that Mr. Chipman will be transitioning from the company in May.

Editor in Chief Greg Tito expressed concern over the transition. "There may be some readers who won't like the new look of the Escapist under its Facebook ownership". He offered them some practical advice. "I grew up in New England and the weather changes regularly enough for there to be an old adage which, I think, applies in this situation," Tito said. "If you are unhappy with Facebook's new Escapist design, just wait five minutes." Facebook has confirmed that Mr. Tito will also be transitioning from the company in May.