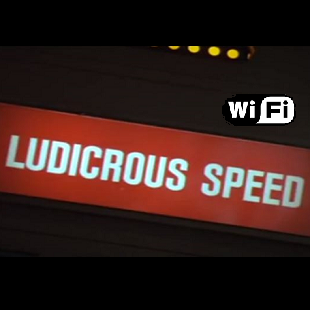 Newly freed spectrum should give public/outdoor WiFi a shot in the arm.

The FCC made a landmark decision today that should give your local free city/telco-provided outdoor WiFi a serious speed boost.

So what's changing? The FCC has freed up 100 MHz of spectrum in the 5 GHz band, which will allow for much higher potential WiFi speeds when connected through public hot spots. Theoretically, speeds could hit 1 Gbps, but that kind of speed won't happen for quite some time. However, the hair-pullingly slow public WiFi you're used to dealing with (like yours truly in Santa Monica and the like) should come to an end.

From the announcement on the FCC website: "The rules adopted today remove the current restriction on indoor-only use and increase the permissible power which will provide more robust access in the 5.150-5.250 GHz band. This in turn will allow U-NII devices to better integrate with other unlicensed portions of the 5 GHz band to offer faster speeds and reduce congestion at crowded Wi-Fi hot spots such as airports and convention centers."

In short: Spectrum and regulations reserved for in-home network equipment will now apply, in some form, to equipment used in public spaces. This will definitely be of help once more 802.11ac devices make it out into the world.