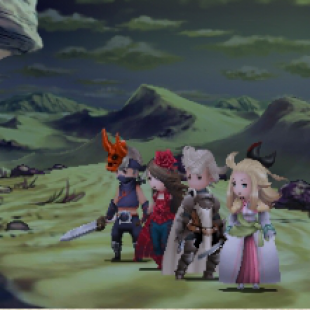 Square Enix president Yosuke Matsuda says the company has lost its focus in recent years and will be reinvesting in "heavy JRPGs" in the future.

Not too long ago Square Enix committed to an effort to expand its customer base by investing in companies and games that it hoped would appeal to gamers outside of its traditional JRPG fan base. They were efforts that didn't pay off quite as well as the company had hoped. While games like Tomb Raider would eventually reach its goals, several other titles failed to hit their sales targets.

That being the case, Square Enix recently found itself with an unexpected hit in Bravely Default, a classically-styled JRPG that sold well across multiple territories, including North America where it moved 200,000 copies within the its first three weeks at retail. The game's success wasn't lost on Square Enix president Yosuke Matsuda who, in a recent interview, revealed that the company may take steps in the future to move back closer to its roots.

"In the past, when we developed console games with a worldwide premise, we lost our focus, and not only did they end up being games that weren't for the Japanese, but they ended up being incomplete titles that weren't even fit for a global audience," said Matsuda. "On the other hand, there are games like the JRPG we made for the Japanese audience with the proper elements, Bravely Default, which ended up selling well all around the world."

Matsuda would go on to say that Square Enix, in the past, has failed to recognize that "fans of JRPGS are really spread around the world" and that the information gap limiting fans in the past have pretty much been erased by the advent of the internet. "There's a sense of mass, which loses the image of a niche market." In turn, he said, the company will be refocusing its efforts in the future to produce new and "heavy" JRPGs.

As a devoted fan of Square Enix's classic RPG library, this sounds like music to my ears. That said, what do you think? Will Square Enix find greater success by taking notes from its past, or is it taking steps toward another wrong turn?