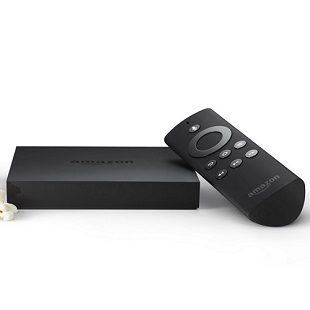 Bluetooth gaming controller is a $40 extra.

Amazon's new FireTV set-top box is now on sale for $99, and an accompanying Bluetooth gaming controller is $39.99.

The FireTV lines up pretty well with what the rumors all pointed to: a small set-top box, based on mobile hardware, that pulls in content from Amazon's own services, as well as third-party providers. Netflix, Hulu Plus, Dhotime, Pandora, and Vimeo are just a few on the list. The full list of content and apps for the FireTV can be seen here. Prime members can link their accounts to gain access to Prime Instant Video, too.

As for the tech specs, the FireTV uses a Qualcomm Snapdragon 8064 SoC (system on a chip), the same chip/chip family used on several Galaxy S4 variants, and the Nexus 7 (2013). It's paired with 2 GB of DDR3 memory, and 8 GB of non-expandable storage (no SD card slot). I/O includes HDMI, digital optical audio, Ethernet, USB, Bluetooth 4.0, and 802.11n WiFi.

The Bluetooth can be used to pair the FireTV with the optional, $39.99 Amazon Fire Game Controller -- which looks exactly like the leaked controller we posted about in March. It's the most inspired controller design, but sitting between an Xbox One and Nintendo Pro controller? Could be worse.

If you're not planning on playing games through your FireTV, in the included Roku-esque remote should serve you just fine. It has voice control/voice search built in, too, which should make content browsing that much easier (in theory).

Confirmed games for FireTV include Telltale's The Walking Dead, and Minecraft: Pocket Edition, and a slew of other Android titles (see the above app link).

Oh, and last but not least? Gary Busey made a FireTV ad, and it's as Gary Busey as you would imagine.

Planning on buying a FireTV? Or is your Xbox or Roku serving you just fine for now? Let us know on the forums.