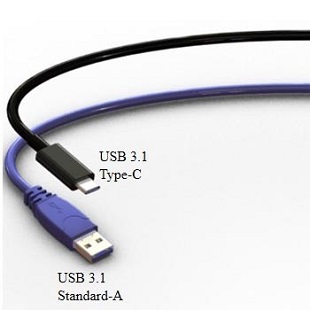 New connectors can be plugged in either-side up, will be micro USB-sized.

The first renderings (courtesy of Foxconn and USB-IF) of the new USB 3.1 connector have surfaced, and it's good news all around.

The "Standard-A" and "Micro-B" connectors won't be changing much -- Standard-A is the USB connector you're used to using with your PC or Mac, and Micro-B is the dual-head connector most USB 3.0 hard drives use. But a new "Type-C" connector will be replacing the micro USB connector every non-iPhone owner on the planet is accustomed to.

Type-C brings a host of improvements, the first of which is reversibility. Similar to Apple's Lightning connector, USB 3.1 Type-C connectors are symmetrical, and can be plugged in without worrying about orientation. Not that plugging in micro USB devices is hard, obviously, but there's no chance for error now.

Power throughput is getting a boost as well. While micro USB typically supplies gadgets with 1.1 or 2.0 A of power now, 3.1 will allow for up to 5.0 A of power. Assuming the circuitry on the gadget end is up to snuff, this means shorter charging times without burning out your battery.

The 3.1 spec hasn't been officially approved, but the renderings from the USB-IF are proof that the standard should be official in the near future.