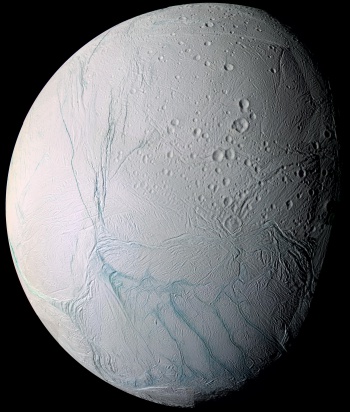 New data from NASA's Cassini spacecraft suggests that Saturn's moon Enceladus may have a large ocean beneath its icy surface, with essential elements for life possibly present.

While Jupiter's moon Europa has been stealing the show of late in the search for extraterrestrial liquid water, Saturn's moon Enceladus has entered the ring as a serious contender. New data from NASA's Cassini spacecraft suggest that an ocean at least the size of Lake Superior lies below a thick ice layer on the moon's southern pole.

Enceladus' north pole has a thickness of ice around 30 miles deep sitting above solid rock. The results of the data, published in the journal Science, suggest that the south pole's 18 to 24 mile deep ice cap sits atop an ocean that is 5 to 10 miles deep. The ocean appears to sit on top of a rocky core and "may extend halfway or more towards the equator in every direction," said study co-author David Stevenson, professor of planetary science at California Institute of Technology, in a press conference.

"As far as whether one should go first to Europa or Enceladus, I look at this as a kind of a cornucopia of habitable environments in the outer solar system," study co-author Jonathan Lunine of Cornell University said in a press conference.

If the rock on which the ocean sits is composed primarily of silicate minerals, as data suggests, then water circulating through the rocks could pick up elements such as phosphorous, sulfur, potassium and sodium. These elements are necessary for making molecules essential to life, Lunine said.

Cassini has also detected organic molecules, which may arise from either biological or non-biological sources, in certain regions of the moon.