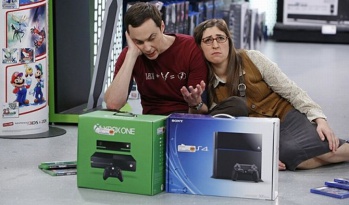 Last night's The Big Bang Theory has Sheldon making the ultimate decision: PS4 or Xbox One?

Choosing a "side" when it comes to gaming is nothing new. It happened way back when it was the SEGA Master System vs. Nintendo's NES, and it's still continuing with the PlayStation 4 vs. the Xbox One -- though, most arguments these days consist of resolution/frame rates and comparing hardware sales. In tonight's episode of The Big Bang Theory titled "The Indecision Amalgamation," lovable nerd Sheldon must make the ultimate choice: whether to buy an Xbox One or PS4. If you're wondering why Sheldon just doesn't buy both, it's a simple case of Sheldon being Sheldon, and not having enough space to buy both. I won't spoil how it ends, but let's just say the show played it rather safe.

This choosing sides thing hasn't escaped the console-makers themselves. The official Xbox Twitter even went on as far as tweeting The Big Bang Theory's Twitter, "You know what to do, Sheldon," with an image of the Xbox One with Sheldon's name as part of the message.

Odds are, this won't be the last time we'll see a major TV show feature the PS4 or the Xbox One, since gaming is a pretty big part of people's lives these days. Have you watched the episode? Which console should Sheldon have chosen? And come to think of it, with Sheldon's various eccentricities, which console would suit him best?

For the latest in console news, Sony has sent out a survey to PS4 users asking them what they think of a reputation system, and how much they want to be able to change their PSN usernames; while Microsoft is bringing universal Windows apps to the Xbox One.