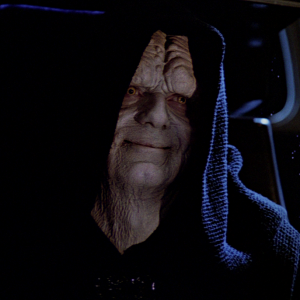 We'll cut to the chase. You'll recall rumors which popped up earlier this week that held Star Wars VII would begin filming in Morocco on May 14, and further that the film may already be shooting in Cairo? Well, while the Morocco rumors have yet to be confirmed, but turns out the film actually is filming as we speak. Disney Studios chairman Alan Horn confirmed as much on April 2, in an interview only published last night on The Hollywood Reporter. "Actually, we're shooting some of it now" is how Horn put it when asked to comment on the Morocco rumor.

According to Horn, "It's all about the screenplay. It has to be screenplay, screenplay, screenplay." And he's right, as Midichlorians and erotic discussions of sand proved a decade ago. I kid of course, but this script has had a messy go of it. Michael Arndt was hired to pen the original draft, but for reasons so far unexplained, last October his work was pretty much thrown out and screenwriting duties were taken over by JJ Abrams and Lawrence Kasdan. But according to Horn, and luckily for the still-uncast (or unannounced, more on that in a sec) actors, that part of the production is locked down. "It actually is now," he told the Hollywood Reporter regarding whether or not the script is ready for shooting.

The same cannot be said for casting, however. You might have noticed a suspicious lack of any official announcement about the film's cast. Rumors have it that Mark Hamill, Carrie Fisher and Harrison Ford will reprise their roles as the original trilogy's power trio of Luke Skywalker, Princess Leia and Han Solo. Other rumors claim Girls' Adam Dwyer will be playing the film's central villain. But nothing has been confirmed, and this is apparently because Star Wars VII hasn't even been fully cast yet. "[W]e have a lot of them," Horn said in the interview, but "it's just not completely done yet."

Before we worry too much about the fact that this film really seems just super rushed, the filming Horn is talking about here is, most likely, footage for visual effects and other things you can pick up without having the cast on hand. Rumors that May 14 is the official start of principal shooting may yet turn out to be true. Even so, this is a JJ Abrams' film we're talking about, and that probably means the ridiculous "mystery box" is fully in effect here. In fact, after the debacle that was the promotional efforts for Star Trek Into Darkness - forcing the cast to outright lie about the fact that Benedict Cumberbatch was playing Khan - I am willing to bet real money right now that not only has the film been fully cast, but they're sitting on the news.

Which means, let's all prepare to groan when Disney celebrates May the Fourth by announcing the complete cast, the official title, and a plot synopsis that dissembles the actual story. Let's speculate about how much will be proved patently untrue once the final film comes out in comments, shall we? My guess is that after two years of hype, when the film comes out it will turn out to actually be a sequel to Howard the Duck.