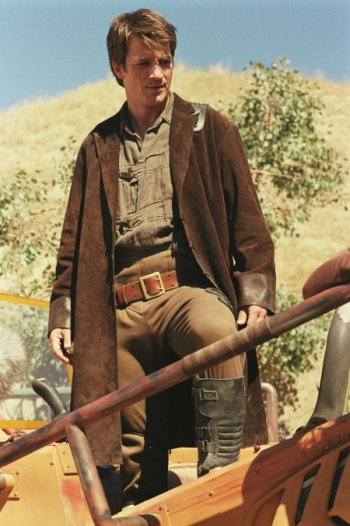 Firefly's Malcolm Reynolds might be a part of Marvel's Guardians of the Galaxy after all, as Nathan Fillion has advised fans to "check the credits".

When Guardians of the Galaxy was first announced, one common way it was described (other than "the comic with a rocket-wielding raccoon") was "like Firefly in the Marvel Universe". For that reason, some hoped that Firefly and Serenity lead Nathan Fillion would resume his sci-fi Western swagger to play as Peter Quill, Star Lord, although ultimately the role was given to Chris Pratt. That's not to say Fillion won't appear at all, however; while speaking at a Firefly panel during Wizard's World Comic-Con, Fillion teased that fans should keep an eye on the credits for a surprise cameo.

It's certainly not a definitive answer, but Fillion's friendship with director James Gunn does lend some weight to his words (not to mention a minor connection to The Avengers director Joss Whedon). Gunn finished his reshoots for Guardians of the Galaxy recently, which would have been a great opportunity to add a last-minute cameo.

My guess is that Fillion did some last-minute voice work that has a chance of being included in the theatrical cut. If so, that means Fillion would either replace Stan Lee as Guardians' "surprise" cameo, or appear in the inevitable post-credits sequence. We'll find out for certain when the movie is released on August 1, 2014.