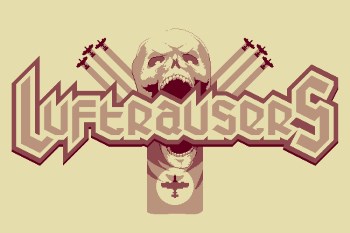 Vlambeer says its hit indie action game Luftrausers isn't about Nazis, but it's very sorry for any discomfort it may have caused.

Luftrausers is an awesome arcade blastfest that earned 4.5 stars in an Escapist review. It also sports an undeniably distinct theme, hinted at by its title, and even if that's not quite obvious enough there's no mistaking the roots of the visual style. It never comes right out and says you're flying for the Nazis, but you sure ain't up there yanking and banking for King and country.

Despite the obvious silliness of the game, it's a theme that not everyone is comfortable with, sentiments that came up on Twitter last week. In response, Vlambeer's Rami Ismail wrote yesterday that he's "extremely sad" that some people see the game in that light, and added that while the Nazi link was never intended, it is a valid interpretation of the game.

"The fact is that no interpretation of a game is 'wrong'. When you create something, you leave certain implications of what you're making. We can leave our idea of what it is in there, and for us, the game is about superweapons. We think everybody who plays Luftrausers can feel that," he wrote. "But even more so in an interactive medium, we do have to accept that no way of reading those implications is 'false' - that if someone reads between the lines where we weren't writing, those voids can be filled by the player, or someone else. If we accept there's no wrong interpretation of a work, we also have to accept that some of those interpretations could not be along the lines of what we're trying to create."

Ismail said Luftrausers is intended to be a sort of alternate universe game set sometime between the end of the Second World War and the beginning of the Cold War, and that the player is part of an "undefined enemy force" that never actually existed. A desire to be "genuine" about the game's time frame led to the use of stylistic cues from the era, while the characters are actually rooted in the old Thunderbirds television show.

But to his credit, Ismail didn't dismiss the concerns of those who found the game disturbing. "Each interpretation of a cultural artifact is a reflection of not only the creator, but also of what the user cares about, what they find important and what shaped them. We wouldn't dare to fault people for finding the atrocities of the Second World War important. It is important," he wrote. "Having been born and raised in the Netherlands, we are extremely aware of the awful things that happened, and we want to apologize to anybody who, through our game, is reminded of the cruelties that occurred during the war."