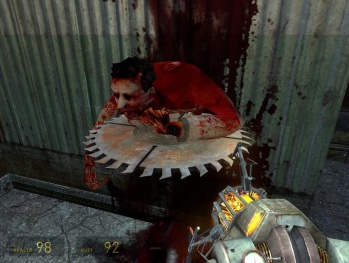 The University of Oxford cites aggression after playing video games are more likely to be linked to gameplay mechanics rather than violent in-game content, with the research group using Half-Life 2 as their test game.

While some criticizers are quick to point to violent video games as to why some people get physical and aggressive, that might not be the case if a recent study from the University of Oxford is to be believed. Published by BBC, the report states that games that have counter-intuitive or frustrating controls or gameplay mechanics produced more aggressive reactions from people. The research, which had its findings published in the Journal of Personality and Social Psychology, sought to establish whether it was violence in video games that made players feel aggressive, or a combination of other factors. One of the studies involved modifying Valve's Half-Life 2, where the researchers created a "modified version" in which instead of killing enemies, the player can "tag" foes instead, and they'd then evaporate. This version was tested along with the normal, violent version, to a group of subjects. But one key difference was only some of the gamers were given a tutorial before playing the shooter, so they could familiarize themselves with Half-Life 2's game mechanics and controls. Researchers found that it was players who didn't undergo the tutorial that felt less competent and more aggressive, instead of the people who played the graphic version of the game.

According to Dr. Andrew Przybylski from the Oxford Internet Institute, who carried out the research along with colleagues from the University of Rochester in the US, "If players feel thwarted by the controls or the design of the game, they can wind up feeling aggressive...This need to master the game was far more significant than whether the game contained violent material." Dr. Przybylski adds, "Players of games without any violent content were still feeling pretty aggressive if they hadn't been able to master the controls or progress through the levels at the end of the session," and he also states, "We focused on the motives of people who play electronic games and found players have a psychological need to come out on top when playing,"

"Further research is needed into longer-term effects of video game violence beyond initial feelings of aggression.," states Dr. Przybylski. His colleague, and co-author Professor Richard Ryan from the University of Rochester adds, "The study is not saying that violent content doesn't affect gamers, but our research suggests that people are not drawn to playing violent games in order to feel aggressive..Rather, the aggression stems from feeling not in control or incompetent while playing." Ryan finishes by saying, "If the structure of a game or the design of the controls thwarts enjoyment, it is this not the violent content that seems to drive feelings of aggression."

While not conclusive proof that violent video games don't turn people into aggressive sociopaths, this is at least a step in the right direction and gives us a further understanding as to how some games might cause aggressive behavior in some people, instead of just blaming violent games as the cause.