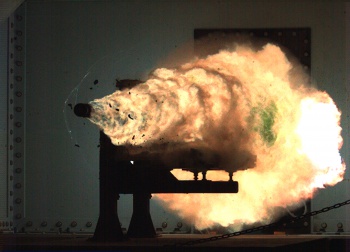 The U.S. Navy will begin sea trials for a railgun in 2016 and will integrate the weapons technology into warships as early as 2018.

In 1983, President Ronald Reagan was derided for proposing the Strategic Defense Initiative, which was dubbed "Star Wars" by the mainstream media. That initiative sought to use ground-based and space-based systems to protect the U.S. from attack by nuclear missiles. Today, the U.S. Navy is planning sea trials for a "Star Wars" technology weapon that will make enemies think twice, according to the Navy's research chief.

Rear Admiral Matthew Klunder, the chief of Naval Research, recently spoke to a round table group about a weapon that can fire a low-cost, 23-pound projectile at seven times the speed of sound using electromagnetic energy: a railgun. Klunder said that the weapon had had already undergone extensive testing on land and would be mounted on the USNS Millinocket, a high-speed vessel, for sea trials beginning in 2016.

"It's now reality and it's not science fiction," said Klunder. "It's actually real. You can look at it. It's firing."

Missiles typically cost between $500,000 to $1.5 million, while a railgun projectile costs $25,000, Klunder explained. With that degree of differential, it would no longer be cost-efficient for an enemy to fire a missile at a U.S. warship, giving the U.S. a definitive edge in air and naval dominance.

"That ... will give our adversaries a huge moment of pause to go: 'Do I even want to go engage a naval ship?'" Klunder told reporters. "You could throw anything at us, frankly, and the fact that we now can shoot a number of these rounds at a very affordable cost, it's my opinion that they don't win."

The U.S. Navy is looking into developing a railgun system that can fire multiple shots in succession. While ships can carry dozens of missiles, they can be loaded with hundreds of railgun projectiles, Klunder said.

Officials said they would begin looking at integrating the railgun system into warships after 2018.