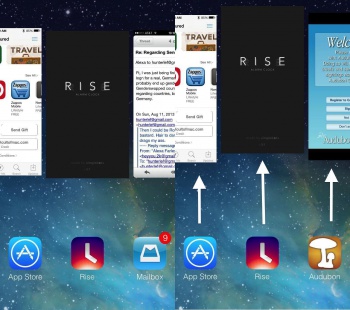 Quitting apps in iOS won't help you save your battery's life, contrary to popular belief.

On computers and other devices, the more software and apps you have running, the more it drains the battery -- that might not be the case for iOS. While it's standard practice by now to close apps that are running on iPhones and other iOS units to preserve the battery's life, writer Scotty Loveless, who worked as a technician in a Genius Bar for two years, claims the contrary. In his blog post called "The Ultimate Guide to Solving iOS Battery Drain," Loveless claims, "I worked on the Genius Bar for almost two years, and the most difficult issue to solve was short battery life. It was extremely difficult to pinpoint the exact reason why someone's battery was draining...I made it my mission to discover the specific reasons for iOS battery drainage. This article is a product of my years of research and anecdotal evidence I gathered in the hundreds of Genius Bar appointments I took during my time as a Genius and iOS technician, as well as testing on my personal devices and the devices of my friends."

His actual explanation as to why quitting/exiting apps on iOS can actually harm a battery's life more than preserve it is detailed below.

Yes, it does shut down the app, but what you don't know is that you are actually making your battery life worse if you do this on a regular basis. Let me tell you why.

By closing the app, you take the app out of the phone's RAM . While you think this may be what you want to do, it's not. When you open that same app again the next time you need it, your device has to load it back into memory all over again. All of that loading and unloading puts more stress on your device than just leaving it alone. Plus, iOS closes apps automatically as it needs more memory, so you're doing something your device is already doing for you. You are meant to be the user of your device, not the janitor.

The truth is, those apps in your multitasking menu are not running in the background at all: iOS freezes them where you last left the app so that it's ready to go if you go back. Unless you have enabled Background App Refresh, your apps are not allowed to run in the background unless they are playing music, using location services, recording audio, or the sneakiest of them all: checking for incoming VOIP calls , like Skype. All of these exceptions, besides the latter, will put an icon next to your battery icon to alert you it is running in the background.

Quitting apps on iOS devices might not be good on the battery life, but it does make the device faster to use, which might be a fair trade-off to many. For iOS users who want tips to help improve battery life properly, go check out Loveless' post to learn more efficient and practical ways of doing it.