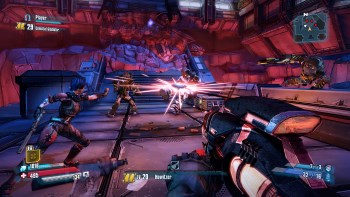 Gearbox boss Randy Pitchford says there just aren't enough next-gen consoles in circulation to justify the expense of developing the new Borderlands game for them.

Borderlands: The Pre-Sequel was announced earlier today, bringing another four characters to Gearbox's hit multiplayer shooter franchise. But it's not bringing the franchise to the latest and greatest game consoles - that would be the Xbox One and PlayStation 4 - because in Pitchford's opinion, it's just too expensive.

"It's not free to build a game for next-gen," Pitchford told Eurogamer. "So when we decide where to spend our resources, we want to spend all of the attention we can on the game itself.

There are still a lot of Borderlands players who haven't upgraded to the latest console generation, he explained, but the number of Xbox One and PlayStation 4 owners who don't have a previous-gen console is negligible.

"Currently there is - between PS3 and Xbox 360 - over 150m installed units worldwide - probably 170m is more realistic. There are fewer Xbox Ones and PS4s than we sold copies of Borderlands 2," he said. "But because Borderlands 2 did so well there's obvious demand there, and we have not been able to serve it sufficiently with just DLCs. And we've consumed all the memory there is to consume to add more content to Borderlands 2."

Pitchford said it's reasonable to assume that there's still a lot of demand for more Borderlands, but it "lives on the Xbox 360, PS3 and PC. We don't know to what extent it'll live on in the next gen. I imagine over time - maybe by the time we get to the third or fourth Christmas - there will be enough of an install base."

It's an interesting line of reasoning, but not one I'm inclined to go along with. The installed base of Xbox One and PS4 consoles is obviously tiny compared to their predecessors but it still numbers in the multiple millions, and more importantly it's one with a relative dearth of games. The mountain may not be as high, in other words, but the road to the top is a lot less crowded, and while Borderlands 2 may be the best-selling Gearbox game of all time, I don't think the series is so wildly popular that it can afford to blow off potential markets.

But hey, I'm not in charge of a big-time game studio, so what do I know? Borderlands: The Pre-Sequel is slated to launch this fall for the Xbox 360, Playstation 3 and PC, and nothing else.