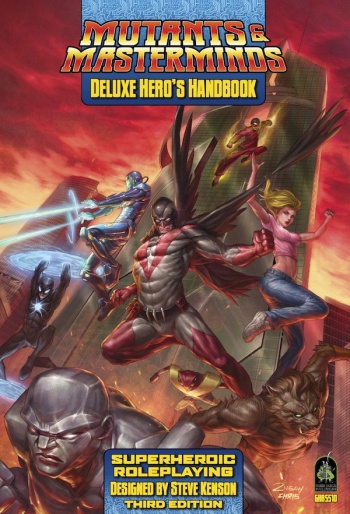 Tabletop roleplaying games draw from a variety of genres, whether you enjoy Tolkienesque-fantasy, science-fiction, or cosmic horror. One stand-out fan favorite has always been superheroic roleplaying, thanks largely to games like Mutants & Masterminds. Now in its third edition, M&M adapted Dungeons & Dragons' traditional d20 rules into a comic book universe format, one covering everything from otherworldly protectors to gritty vigilantes. Now the Third Edition Deluxe Hero's Handbook has made its Bundle of Holding debut, complete with pregenerated characters, Gamemaster resources, and an introductory adventure in M&M's Emerald City.

Beginner players will want to start with Mutants & Masterminds: Deluxe Hero's Handbook, a revised and expanded edition of the Third Edition rules. The base bundle also includes the Gamemasters Guide and Sentinels character pack, providing more than enough resources to start superpowered campaign. Paying above the average, however, also nets two supplements for the Emerald City campaign setting: the seven-part Emerald City Knights and a Threat Report encompassing over 60 new supervillains. Finally, the Mutants & Masterminds Gamemasters's Kit bundles key charts and tables, along with a Quickstart Character Generator for whipping up unique powers and origins.

Having played M&M's Third Edition (or more accurately, the DC Comics version of the system), I agree that it's a great choice for superheroic roleplaying. The rules and powers are versatile enough to support wildly different character types, including street-level crime fighters, World War II heroes, or the godlike beings who could annihilate armadas. Green Ronin has also published an impressive array of supplements that might (if we're lucky) be included in the Bundle at a later date. Either way, if you're in the mood for a tabletop superhero campaign, these starting materials can definitely set you in the right direction.