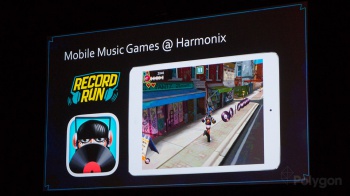 The game will allow players to import songs from their own libraries to use as a soundtrack.

Update: Harmonix has confirmed to Polygon that Record Run is planned for a May release on iOS and Android platforms. Australia and Canada will actually be able to get the game a little sooner, as Harmonix expects those versions to be available in the next week or two with the wider release to follow.

Original Story: The newest game from Guitar Hero and Rock Band creator Harmonix will be Record Run, available soon on mobile platforms. While Harmonix did not have an exact release date or operating system for the game when they announced it at PAX East earlier today, they did say it would be free-to-play and that it would be similar to the Bit.Trip.Runner series.

Record Run will allow players to import songs directly from their collection into the game, said studio head Alex Rigopulos. "If you really love the music in the game, you enjoy the game more," he said.

In a video shown at PAX, game footage showed a character jogging down a two-lane sidewalk to the beat of the song being played, sliding and jumping past obstacles while collecting vinyl records. Harmonix also has "lots of other irons in the fire on mobile, most of them very different" from Record Run, Rigopulous said.