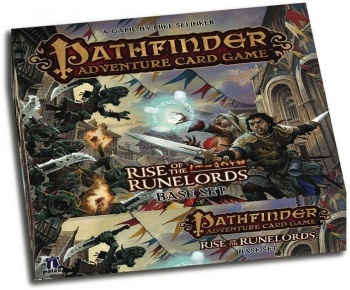 The news was announced during a panel at PAX East.

The surprisingly popular Pathfinder Adventure Card Game is getting an in-stores organized play program with weekly scenarios and individual character decks for single players, said designer Mike Selinker. "We want stores to be very important to us," said Selinker. "We want to go out of our way to make something that stores can get people together over." Selinker also mentioned that there will be seven different class decks at release for organized play, which will retail individually as opposed to in one huge box, as they are sold now. He mentioned that character variety was a major concern, saying that "All genders, races, and classes" were on the table as Paizo wanted to prioritize getting people characters like themselves. The new class decks will play differently than the existing ones of the same class, and differently than the ones in the upcoming Skull and Shackles expansion for PACG.

Selinker's Pathfinder Adventure Card Game, published by Paizo using their Pathfinder Roleplaying Game world and scenarios, has been a surprising hit, selling out a semi truck's worth of games in "about four hours" at Gen Con, according to Selinker. In PACG, players take on the role of a hero fighting enemies and solving adventures. The heroes are represented by individual decks, that grow, change, and add cards over time to handle new and more difficult threats.

Mike Selinker is the proprietor of Lone Shark Games, and is a developer of other notable titles like Betrayal At House On The Hill and Pirates of the Spanish Main, and one of the creative directors on the 3rd Edition of Dungeons & Dragons.