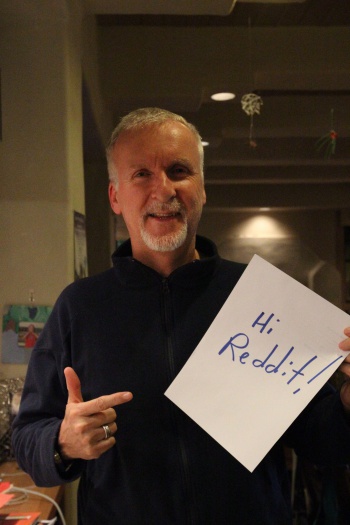 James Cameron, director of Aliens and other noteworthy films, answered fan questions on Reddit and states he thinks Prometheus was an interesting film, but at the end of the day, "it didn't add up logically."

Over the weekend, legendary director, writer and producer James Cameron (Titanic, The Terminator) went on Reddit to host an AMA (Ask Me Anything) to help promote Showtime's "Years of Living Dangerously documentary series focusing on climate change, which he helped produce. In the Q&A thread, a fan asked, "How did you feel about what 'Prometheus' contributes to the 'Alien' story ark? And which is your favorite movie?"

Interesting. I thought it was an interesting film. I thought it was thought provoking and beautifully, visually mounted, but at the end of the day it didn't add up logically. But I enjoyed it, and I'm glad it was made. I liked it better than the previous two Alien sequels.

Just in case you're not familiar with Cameron's work, he directed Aliens, which is arguably the best entry in the franchise. While his statement might seem like a dig at director Ridley Scott's Alien prequel, Prometheus, he does say that he thinks it's better than the previous Alien sequels, which, when you think about it, was not a hard feat to pull off.

Elsewhere in the Q&A session, Cameron was asked what his favorite guilty pleasure movie to watch was, to which Cameron replied with, "Oh, probably Resident Evil, the first one." I admit, I'd never have guessed that someone with Cameron's directorial slate would ever find a film like Paul S. Anderson's Resident Evil movie entertaining at all.

Make sure to check out the Reddit thread since Cameron answers hotly debated topics such as who would win in a fight against an Alien Queen, the T-800 Terminator and Avatar's Na'vi; why he abandoned a True Lies sequel and lots more.

In more positive Prometheus news, the sequel is planned for a 2016 release and will have an "Alien-y scope."

Do you agree with Cameron's statement regarding Prometheus? How would you rank the prequel in the Alien film hierarchy?