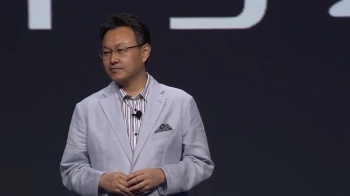 Sony Worldwide Studios boss Shuhei Yoshida is known to be a gamer of all platforms and not just those made by Sony's PlayStation division. This fact is not only evident if you follow Yoshida on Twitter, but the Sony exec even owns two units of every console so he can play Japanese and US games. Speaking to PlayStation 4 lead architect Mark Cerny over the weekend where he detailed his career in the gaming industry, Yoshida admits he has already been banned from Nintendo's MiiVerse social network twice.

The first time was because I had my Twitter account in my profile and that's against the rules...The second time is because I wrote, 'I love PS.' You're not supposed to promote a commercial product in MiiVerse, so they correctly interpreted 'PS' as 'PlayStation.'

In the same chat, Yoshida also talked about his time working with the "Father of PlayStation," Ken Kutaragi. "Working with Kutaragi was incredibly difficult," claims Yoshida, since Kutaragi could do an immediate 180 in terms of what he wanted. "Every week his direction and instructions could change," Yoshida states.

However, even if Kutaragi was hard to work with, the former PlayStation head noticed Yoshida's work and complimented him twice -- which was an odd occurrence since Kutaragi was known to "struggle" in giving compliments to co-workers. "I was complimented by Ken twice!" says Yoshida and adds, "When I say this to my colleagues, they say 'twice? That's a lot!" This is a stark contrast to Yoshida who gives compliments more freely and mentions, "For me, giving a complement is free, it's like a smile from McDonald's...But still, we all love Ken."

If you want to get in touch with Yoshida directly, try reaching him over on Twitter where he responds to PlayStation fans even during his personal time and mostly gives honest answers instead of canned ones provided by Sony's PR department.

Do any of you remember Kutaragi? While highly improbable, how would you feel if the former father of the PlayStation brand came back?