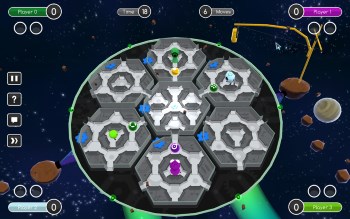 Unable to make headway on Steam Greenlight, the developer of UFHO2 has put a torrent of the game on The Pirate Bay.

Things were looking pretty good for UFHO2 in 2012. A successful Kickstarter campaign wrapped up in February of that year and in August, it landed on Steam Greenlight. And there it sat. The develeper, Ciro Continisio, announced last month that the game would be launching in full on Desura and the Humble Store on April 1, and so it did, yet the effort to get it on Steam remains stuck and ignored.

It didn't take long after its release on other digital storefronts for Steam's dominant position in the industry, coupled with the lack of progress in getting UFHO2 onto it, to convince Continisio that the game is effectively dead in the water. But instead of giving up, he's decided to just give it away.

"My game UFHO2 has been on Greenlight for 2+ years now, and with no luck. Is it so shitty?" he wrote in a Reddit post. "I released it days ago on Desura/Humble Store, but the trend is clear: nobody is going to buy it unless it's on Steam. Thus, I've put it on torrent so everyone can enjoy it."

It's an unfortunate outcome that speaks rather poorly of Steam Greenlight, although its dysfunction is hardly a secret, and also highlights the overriding importance of Steam to indie studios and the dangers of not making it through the Greenlight process. Fortunately for Continisio, he's having better luck with the iOS version of the game.

"On mobile [UFHO2] is doing slightly better, because even if super crowded the App Store has mechanisms to make good game emerge, and a lot of websites publish articles about apps all the time," he wrote. "On Greenlight, nobody is really scouting for good games anymore."

UFHO2 is still available for purchase through Desura or the Humble Store.