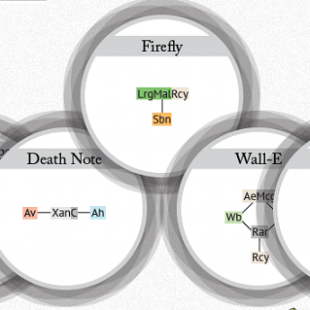 James Harris's Periodic Table of Storytelling has been updated with new click-able tropes and story molecules.

Despite the best efforts of the world's many would-be storytellers to be original and unique, the foundation of fiction is generally still founded in tropes so numerous you could probably fill a book with them. Or, in the least, a periodic table.

And because this is the internet, someone, of course, did just that. Back in February, graphic designer James Harris unveiled his custom made Periodic Table of Storytelling which organized the tropes cataloged by TVTropes into a handy info-graphic styled after the periodic table of elements. The Table was a big hit, prompting Harris to return to it to make some interactive improvements.

Now, Harris has unveiled a new interactive version of his Table with tropes that links users back to the corresponding page at TVTropes. Also among the new additions are "story molecules" that break down popular shows and movies into the tropes that make them up. Firefly, for instance, combines the tropes Mal (Rebellious Spirit), Lrg (Loveable Rogue), Rcy (Recycled In Space) and Sbn (Screwed By The Network). Similar formulas are included for Star Wars, Ghostbusters and My Little Pony: Friendship is Magic, among others. All in all, it's a fun way to kill five minutes and we'd strongly urge to take a peek and perhaps even piece together your own molecules based on your own favorite shows and stories.