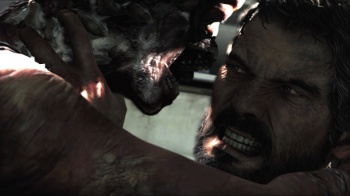 Gamers who purchased The Last of Us on PS3 last year may receive a price drop on the PS4 version.

If you missed out on The Last of Us, the post-apocalyptic stealth adventure game from Sony and Naughty Dog, you'll soon have another chance--it's hitting the PS4 later this year. But what about those who purchased the game for full price less than a year ago and want to experience it again on a newer console? According to Naughty Dog Community Strategist Eric Monacelli, some kind of discount may be in order. Responding to a question on the European PlayStation Blog, Monacelli replied that the publisher was "looking into" options that would help gamers who already purchased The Last of Us and its DLC.

"Any chance that people who own TLoU on PS3 and also the season pass will get a discount on TLoU Remastered?" This question was asked by one commenter, with similar thoughts echoed by others, and Monacelli was understanding in his response. Though he made no promises, he stated, "We're looking into the business model for all this and will post about this once we have input from all regions."

While that's not exactly a confirmation of a discount for loyal buyers of multiple versions of The Last of Us, it's nice to see someone from Naughty Dog at least acknowledge this question. The Last of Us isn't the first last-gen game to get the next-gen revamp treatement--Tomb Raider: Definitive Edition launched for the Xbox One and PS4 earlier this year, at full retail price, less than a year after the game's original release. Re-purchasing fairly recent games for $60 isn't really practical for most of us, so it would be nice to see some sort of recognition and discount should this trend continue; we'll see if The Last of Us: Remastered actually sees a price drop for previous buyers.