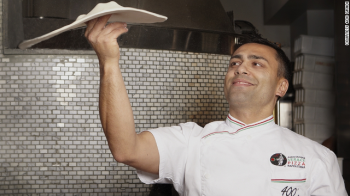 While Italy invented the pizza, plenty of people have argued that chefs in the United States of America have perfected the vegetable, creating many unique "only in America" variations such as the Chicago deep dish. So, you can understand the shock when at the Campionato Mondiale Della Pizza (Pizza World Championship) held in Parma, Italy this year, it was neither an Italian or an American that walked away with the coveted "best margherita pizza" prize.

Instead, humble Australian chef Johnny Di Francesco of Melbourne took away the top prize. "It's been an amazing reaction," Di Francesco told CNN. "Honestly, I just went to Naples to do what I love. I didn't think it was going to make such a stir."

Di Francesco, 36, beat more than 600 competitors from 35 countries to take home the Specialita Traditionale Garantita pizza prize in the annual competition. Competition rules in this category are very strict, as only peeled tomatoes, certain types of mozzarella, garlic, olive oil, salt and fresh basil leaves can be used to top the pizza.

"With a lot of other pizzas it's easy to mask the flavor with toppings so you don't really get the flavor out of the dough. With a margherita there is no hiding anything that isn't right."

Furthermore, despite claiming the title, Di Francesco has no plans to "cash-in" on his fame by raising the price of his pizzas at 400 Gradi, his Brunswick Street store. They will stay at $20 a pop, which is a fairly average price for a large pizza in Australia.