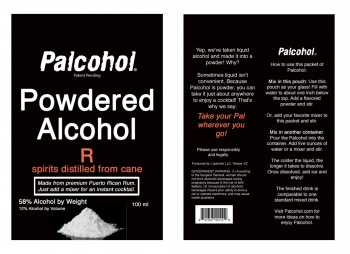 Palcohol transforms a shot of vodka or rum into a small pouch of powder.

Tired of lugging around clunky bottles to parties? Want to purchase your booze more discreetly? Palcohol may be the product for you. The product, which has been approved for sale by the Alcohol and Tobacco Tax and Trade Bureau (TTB), is exactly what it sounds like: a powered form of alcohol that you mix with water to make a drink.

To start off, the company plans to make margarita, mojito, cosmopolitan, and lemon drop "pre-mixed drink" flavors, as well as two "hard liquor" flavors: vodka and rum. The product's motto is "Take your Pal wherever you go!" and would seem to have its uses sneaking alcohol into places that traditionally have quite strict regulations, such as movie theaters, live venues, and sports events.

As for the "elephant in the room," that is, the concept of "snorting" the powered alcohol, the original version of the Palcohol website had the following to say:

Let's talk about the elephant in the room... snorting Palcohol. Yes, you can snort it. And you'll get drunk almost instantly because the alcohol will be absorbed so quickly in your nose. Good idea? No. It will mess you up. Use Palcohol responsibly.

It has since been updated to state that the powder is cut with enough filler to make snorting inefficient.

While the product does have TTB approval, there are also state regulations, and even if the government provided its full approval, retailers and wholesalers would still have to get on board. Nevertheless, Palcohol's founder says that he plans the product to hit liquor store shelves this fall.