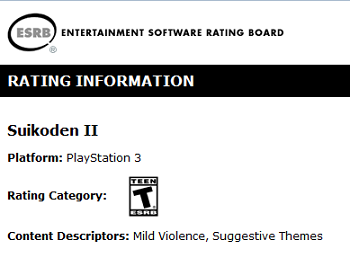 Suikoden II has recently received a new rating by the ESRB for a new PS3 release.

Today could be a good day for JRPG fans. While it has yet to be confirmed by Sony or Konami, a recently added ESRB rating would seem to indicate that the genre classic Suikoden II may be set to release on the PlayStation Network as a PS1 Classic.

If this winds up being the case, it could arguably be one of the most significant Classic releases in some time. Suikoden II has long been regarded by a cult of loving fans as one of the best JRPGs ever made thanks to its deep story, gigantic cast (more than 100 recruitable characters) and unique integration of large scale tactical battles in addition to the more standard turn-based combat.

Its critical and fan acclaim aside, its also one of the most difficult PS1 games to actually find. While the people who played it loved it, the game itself sold poorly in North America and was, in turn, the recipient of a very limited print run that's transformed it into a rare and expensive title in the years since. A hard copy of the game today, for instance, can cost hundreds of dollars. In other word, a North American PSN re-launch could be the first opportunity that many gamers have ever had to (legitimately) play it.

We've reached out to Sony for more information and will let you know when we learn more.