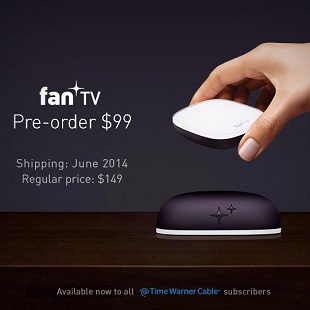 This small streaming unit could soon replace the bulky, expensive cable box under your HDTV.

Everyone has a love-hate relationship with their cable box. You love it because (assuming you have cable) it pipes new TV shows into your house the night they air, which means you don't have to murder co-workers for spoiling that thing in Game of Thrones...because you've already watched it!

But the hate comes in many forms: Cable boxes are expensive, and usually dated. Older software hinders what should be a state-of-the-art experience. Something you're paying $50 or more per month for (not to mention the cable box rental fee) should feel new, right?

Fanhattan wants to the change the cable TV experience with its Fan TV streaming box, and Time Warner Cable wants in at the start. Fan TV is a $149 ($99 if you pre-order) coax cable-free box, about the size of the average Roku, that will bring Time Warner Cable TV and On Demand services into your home later this year. Along with TWC content, users can also access Redbox, Target Ticket, and other services (no Netflix yet).

The Fan TV remote is another selling point, as Fanhattan has ditched buttons, and gone with a 100% touch interface on the soapbar-looking remote. Combined with a sleek UI, and Fan TV looks to be the most modern way to get cable TV in the US.

Expect the Fan TV in June. TWC seems to be the only cable provider on board right now, but hopefully others will follow suit soon, too.