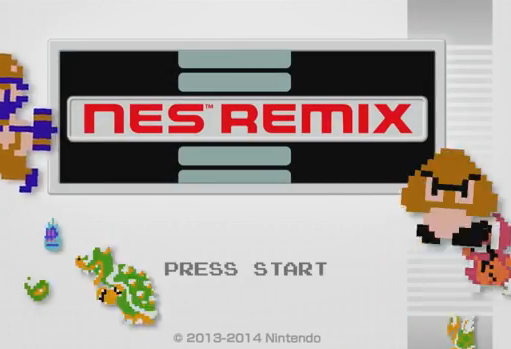 NES Remix director Koichi Hayashida says that a strong enough demand from fans could lead to expanded remix games in the future.

With Nintendo just a few days away from firing off another salvo of nostalgia-laden fun with its game NES Remix 2, many are wondering just how far the company intends to take its new "remix" concept. It's not as if the company would be lacking places to go, of course. With Nintendo's presence in the game industry extending back a solid three decades, there's no lack for titles and platforms that it could turn to to continue this emerging property.

NES Remix director Koichi Hayashida, in turn, has indicated that Nintendo might be willing to expand into other console libraries to give gamers similar re-visitations and twists on their favorite old games. That said, he made no bones about the what the deciding factor would be: Nintendo's fans.

"Personally, I have a large desire to explore that very idea," said Hayashida. "But it really harkens back to the answer I just gave. Does the marketplace want it or need it?" He would go on to affirm that if fans expressed enough of a desire to see new Remix games based on other Nintendo consoles, that the company might find the means to deliver. "If we get a big enough cry for that, with a lot of people saying, 'Hey, we'd love to see more of these perhaps for the SNES, Game Boy or Game Boy Advance,' then it would be something we can take a look at."

Setting aside whether or not the Remix games are even worth buying in the first place, I have to admit that there are some remix titles I wouldn't mind seeing. While Hayashida mentioned the SNES and some of Nintendo's handheld consoles, I'd personally love for the company revisit the N64. Granted, the early days of 3D could be a tad awkward at times, but that early clumsiness could be fodder for challenges all on its own. Just imagine the mileage the company could get out of remix stages based on Superman 64!