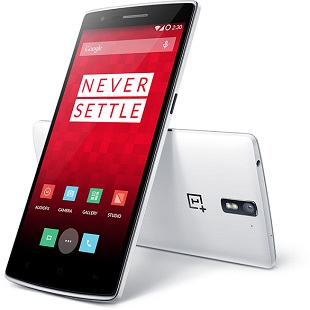 OnePlus has finally -- and fully -- taken the wraps off of its flagship smartphone, the OnePlus One. The Android-based device will cost $299, and should be available later this Spring.

That's all well and good -- especially the RAM -- but many of those specs can be found in the like of the HTC One and Samsung Galaxy S5. The real differentiator here? Android 4.4, with CyanogenMod running on top. CyanogenMod is the most popular Android OS mod out there, and this is the second time a phone manufacturer has baked it right in (the first phone being the Oppo N1). OnePlus had Oppo build the hardware for the One, and its CEO (Pete Lau) is a former Oppo executive, so the relationship is a close one, without a doubt.

Gestures and voice commands are on-board, similar to what you'll find in other Android devices, and the 3,100 mAh battery is supposedly good for a full day of use. The back cover will have a Moto X-style swap program, with options for bamboo, walnut, and kevlar being in the mix.

The OnePlus One will start at $299 for the 16 GB version ($349 for the 64 GB model), and it should be AT&T- and T-Mobile-friendly in the US. Availability? OnePlus will be running a contest that will allow 100 lucky winners to buy a One for $1 -- provided they smash their old phone into oblivion.