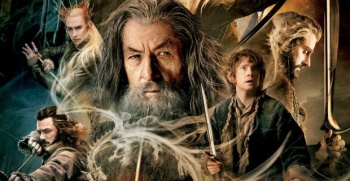 Hobbit director Peter Jackson decided the previous title There And Back Again doesn't fit the movie.

The third and final Hobbit film in director Peter Jackson's trilogy has been renamed from There And Back Again to The Battle of Five Armies. In his announcement, Jackson revealed he's had doubts about the former title since late last year.

"I had a quiet conversation with the studio about the idea of revisiting the title," Jackson said. "We decided to keep an open mind until a cut of the film was ready to look at. We reached that point last week, and after viewing the movie, we all agreed there is now one title that feels completely appropriate."

Jackson explained the title There And Back Again felt appropriate as the title to the second of a two-film story of Bilbo. The series was changed to be a three-parter with the second movie's title as The Desolation of Smaug. With three movies total, Jackson notes There And Back Again as the title of the final movie felt misplaced. "After all, Bilbo already arrived 'there' in the Desolation of Smaug," he said.