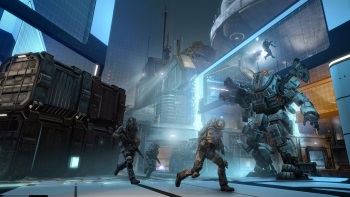 "War Games" is one of three maps included in the Titanfall: Expedition DLC map pack coming next month.

The first DLC map pack for Titanfall is set to come out next month, and Respawn Entertainment has lifted the veil on one of the three maps it contains: "War Games," which is actually set in the training mission simulator within the game. It's composed of "themed areas" based on pre-existing maps, connected by the "smooth, featureless style of the training rooms," with some spots even suffering from occasional visual glitches to remind players that they're battling in a virtual environment.

The IMC start in an Airbase-style section with working Marvins and a tank repair garage, while the Militia begins in an area based on Angel City, but set at night. A tower in the middle, modeled after Rise, provides a shortcut across the map and can be captured by either side, but its narrow, exposed hallway makes any sort of incursion a high-risk maneuver.

The map employs colored force fields as wallrunning panels, some of which stretch for long distances, high above the action. "These are meant to be obvious paths to help encourage players that haven't embraced this new way of traversing maps," designer Jason McCord explained. "Because of the environment, we even used arrows to help guide players where we wanted them to run."

Consideration has also been given to Titans by way of paintball-style fields on the outskirts of the level that are "clutter-free to make enemies easy to spot and paths easy to discern," McCord continued. "Titan spawn points push players into these areas, while also allowing flanking Titans to travel through the center of the map."

The Titanfall: Expedition DLC features three maps, including "War Games," and will go on sale in May for $9.99. It can also be had as part of the Titanfall season pass, which offers three DLC releases for $24.99.