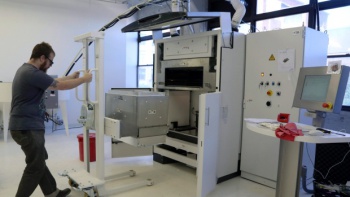 McGill University's new 3D printer could produce 2000 copies of the same object before you'd finally spot them without a microscope.

If you thought the tech industry had a strange habit of miniaturizing everything, know that the print industry is now fully capable of catching up in that department. Canadian researchers at McGill University recently put a new microscopic 3D printer through its paces by producing a 0.011 by 0.014 millimeter National Geographic Kids cover, along with a map of Canada measured in micrometers. Obviously these images are impossible to view normally and could only be seen with the aid of a screen projecter. In fact, the magazine printout is so miniscule that if you made 2000 copies, you'd have just enough to cover a single grain of salt.

The ability to print microscopic objects isn't new, but this printer is praised for being cheaper, easier to use, and smaller than other nanotech tools. By operating a chisel with a tip 100,000 times smaller then sharpened pencil point, the printer can carve microscopic patterns on a strip of polymer within two to three minutes.

Outside of being a godsend to book publishers in Whoville, this 3D printer has several practical applications for scientific fields. Much like the larger 3D printers we're more familiar with, the device can produce a staggering variety of nano-objects. Possibilities include energy-efficient cellphone transistors, nano-sized security tags, and even specialized treatments for conditions like Alzheimer's.

"It's going to help researchers a lot, in terms of turnaround," said Matthieu Nannini of McGill's nanotools-microfab facility. "When a researcher has an idea, and he or she wants to test it right away, they are going to be able to do that with this machine."

This sounds incredibly promising for scientists, although you shouldn't expect a consumer model of this printer anytime soon. Issues of practicality aside, each unit costs about $500,000, which dashes my hopes of creating microscopic tabletop miniatures.