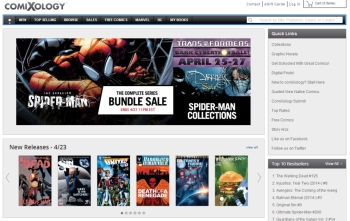 ComiXology is cutting out the middleman with the latest updates to its mobile applications. The digital comics retailer announced Saturday that its existing iOS applications were being retired, replaced with a new version that does not allow for in-app purchases. Users of the iOS app must now directly purchase digital comics from comiXology's website. The change removes Apple, and the 30% cut the iTunes App Store takes from all in-app purchases, from comiXology's sales. For Android users, in-app purchases remain available, but now all purchases are routed through comiXology's own storefront instead of Google Play.

The change comes only a few weeks after Amazon announced that it will acquire comiXology within the year. The changes to purchases for iOS users mirror the approach Amazon uses for digital book sales. Chip Moser, comiXology Vice President of Communications, says, "As we move to complete the acquisition with Amazon, comiXology is shifting to the web-based purchasing model Amazon has successfully used with Kindle, which we expect will allow us to strike the best balance between prices, selection and customer experience." To soften the change, comiXology is offering all customers who have purchased paid content on comiXology an $5 eGift Card credit. The credit expires on May 25.

Prior to the change, the iOS comiXology app was the top ranked application for in-app purchases on Apple devices. The exact reasons behind the change are just speculation at this point, but avoiding Apple's fee on each purchase would certainly boost comiXology's overall take. Several independent comic publishers have exclusive distribution deals with comiXology, and this change could benefit those creators most of all.